Collecting in the present, thinking about the future. Introducing spatio-temporal Seed Transfer Zones

Seed transfer zones (STZ) allow biodiversity conservation technicians and authorities to decide what sites could be prioritized for collection or in situ conservation in the present as they represent potential sources of germplasm for ecological restoration purposes not only in the present but also in the future. In order to approach spatio-temporal STZ, two ELC maps (ecogeographic land characterization maps, see ELCmapas tool) are used, one for the current abiotic adaptation scenarios where the species is distributed in the present, and another that represents its projection into the future under the projected conditions of climate change. Based on both ELC maps and occurrence data, it is possible to determine the populations of a target species that can be used as a source of germplasm to restore another population, in the present or the future, due to the adaptive similarity between both sites.

The methodology applied in Tzones to obtain spatio-temporal STZ was briefly described in this publication:

and has been fully applied in:

However, the idea evolved into a tool thanks to the APFORGIS project, in which an analysis of 68 prioritized forest species in Asia was performed using Tzones. The figure below shows a summary of how Tzones was implemented for APFORGIS. 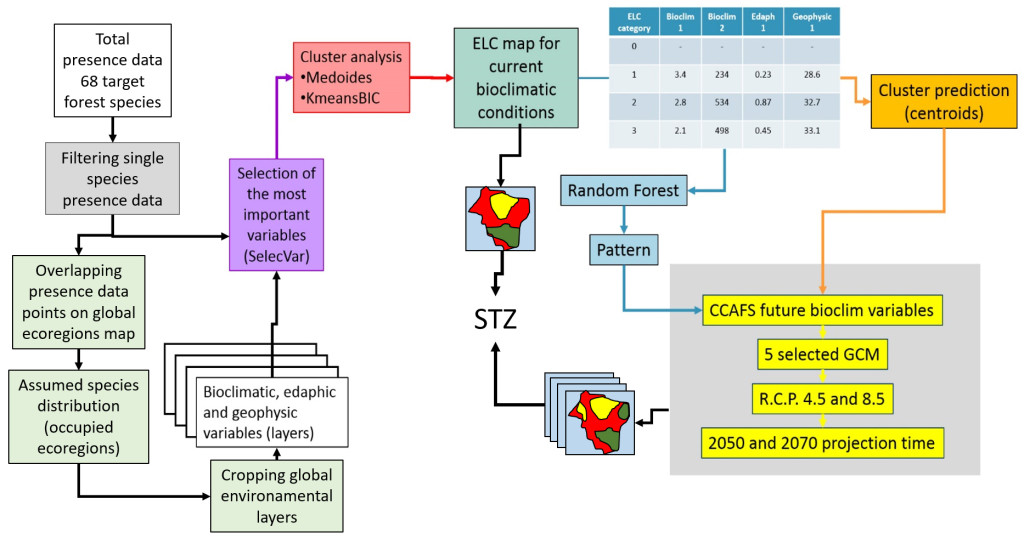 If you want to know more about Tzones, please read the chapter on this tool in the CAPFITOGEN3 user manual by clicking here.

go to CAPFITOGEN3 on server